the lunatics have truly taken over the asylum

the lunatics have truly taken over the asylum

ISIHAC is one of the funniest radio progs on the BBC, although since humphs demise a year or so ago it has lost a little something it still manages to raise a laugh.
the fact that anyone would take this complaint seriously shows how terrified and stupid the BBC high up are.

I have been a fan for years now and love hearing the old shows on 4extra and the new ones on radio 4.

For a return to sanity 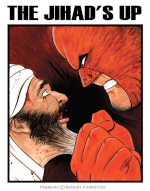 ''A listener complained about two episodes in July last year which she said included 'highly sexist, offensive and harmful' references to Samantha.

'She considered that Samantha was only referred to as a sexual object and believed the male panellists used 'schoolboy sexist so-called humour', that was 'both puerile and unfunny'.'

The report referred to examples of innuendo included on the show, including a description of the character as 'a lovely lady who's scored on more desks than she can remember'. ''


Oh Dear! what an incredibly sad pathetic woman it is who complained. Samantha isn't even real FFS!

I found the comments hilarious!!


In one episode, listeners were told that Samantha was going to the cinema with two men who were fans of horror films because 'she enjoys nothing better than sitting in the back row and being given the willies for 90 minutes'.

'Samantha has to nip off now to meet the Hairy Bikers...They'll light the candle then Samantha will blow them out in the garden.'

'Samantha has got to go off early to meet an entomologist friend who's been showing her his collection of winged insects. They've already covered his bees and wasps and tonight she's hoping to go through his flies.'

'Samantha has to nip out to the House of Lords with her constituency friend. He's looking for support for his MP who's facing expulsion, and Samantha says it's important to have a good peer if his member's likely to be out.'

'Samantha has to nip off to the National Opera where she's been giving private tuition to the singers. Having seen what she did to the baritone, the director is keen to see what she might to for a tenor.'

'Samantha's just started keeping bees and already has three dozen or so. She says she's got an expert handler coming round to give a demonstration. He'll carefully take out her 38 bees and soon have them flying round his head.'

'Samantha has to go now as she's off to meet her Italian gentleman friend who's taking her out for an ice cream. She says she likes nothing better than to spend the evening licking the nuts off a large Neapolitan.'

'Samantha tells me she has to pop out now as she does a few chores for an elderly gentleman who lives nearby. She shows him how to use the washing machine and then goes out to prune his fruit trees. Later he'll be hanging out his pyjamas as he watches her beaver away up the ladder.'

'After tasting the meat pies, Samantha said she liked Mr Dewhurst's beef in ale, although she preferred his tongue in cider.'

Yesterday at 8:01 pm by Flap Zappa

Yesterday at 4:42 pm by Flap Zappa