Women to serve in close combat roles in the British military


A ban on women serving in close combat units in the British military has been lifted by Prime Minister David Cameron.
Women, who have previously served on the front line in support roles, will now be allowed to enter the cavalry, infantry and armoured corps.
Mr Cameron said it was a "major step" and meant the armed forces could "make the most of all its talent".
But the Army's research suggests fewer than 5% of its 7,000 women would pass the current infantry fitness test.

The PM's decision follows a government review in which the head of the Army, General Sir Nick Carter, recommended the ban should be lifted.
Announcing the move at a Nato summit in Warsaw, Poland, Mr Cameron said: "It is vital that our armed forces are world-class and reflect the society we live in.
"It will ensure the armed forces can make the most of all their talent and increase opportunities for women to serve in the full range of roles."
The opening of roles for women in close combat are expected to be phased, initially with positions in cavalry and armoured units and then to the infantry.
Concern over the issue had centred on whether women had the physical capability to withstand the demands on their body that some of the roles will require.
The basic fitness tests for the infantry involves recruits completing an eight-mile march in under two hours while carrying a backpack weighing 55lbs (25kg).
There is also an advanced fitness test of marching two miles carrying 20kg in 18 minutes, and further two-part test of 20 miles carrying 25kg in five hours, followed by 25kg over 25 miles in six hours and 15 minutes the following day.

Hannah Bryce from the Royal Institute of International Affairs told the BBC News website it was a very important decision which will "make the British Army not only more representative of its society, but also more operationally effective".
She added: "Wars are not just fought by men, and do not just affect men. The battleground has already moved from the remote frontlines of 20th Century warfare to a more urban environment and as a result is influenced by all society and not just military personnel.
"The armed forces need women in all military roles if they are to understand and influence events on the battlefield and beyond, This is not just about fairness, but about winning." 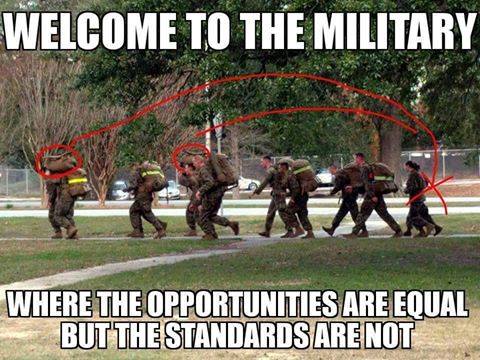 a taste of things to come

youre against women in combat??